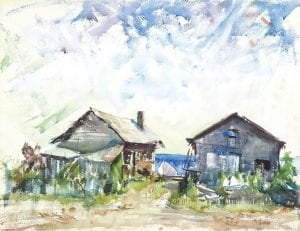 Much of the work of renowned artist Birney Quick featured local landmarks, like this painting of Eckel’s fish houses. Quick’s children are sharing a retrospective of his work at Johnson Heritage Post this summer in a show entitled A Quick Reflection.

The Grand Marais Art Colony has touched many lives through the years. Artists enthralled by the North Shore after a class at the Art Colony have moved north. Local property owners have plein air paintings adorning their walls, purchased at Art Colony “Clothesline Art Sales.” And the community has the honor of being home to the longest-lived art colony in the State of Minnesota. All thanks to Birney Quick, founder of the Art Colony and a talented artist himself.

And now thanks to Quick’s children, Mary, Dan and Leslie, there will be a retrospective of Quick’s work on display at the Johnson Heritage Post July 25 -September 7 in an exhibit titled A Quick Reflection.

Quick opened what eventually became the Grand Marais Art Colony as an outreach of the Minneapolis School of Art in June 1947 with his friend and colleague Byron Bradley of the Kilbride-Bradley Gallery in Minneapolis. It began as the Outdoor School of Painting, according to the Cook County Historical Society, and later programming was offered as the Town Hall Art Colony.

Quick had honed his skills as an artist and instructor before forming the art colony. A Duluth and Proctor native, Quick spent the early 1930s studying at the Vesper George School of Art in Boston. He also studied at several Massachusetts and New York art colonies, including the Barn Studio in Andover, Massachusetts and in Woodstock, New York. He returned to Duluth in 1937 and operated a gallery there, while also employed as a sculpture and art instructor at the College of St. Scholastica.

Quick’s art career was almost interrupted when he joined the Army Air Corps in June 1943. However, art still found him—he spent part of his tour of duty painting a series of murals at the Keesler Air Base in Biloxi, Mississippi.

When he left the service, he joined the faculty of the Minneapolis School of Art as a painting and drawing instructor, where the idea of an art colony on Lake Superior’s North Shore was formed.

In 1956, the School of Art ended its sponsorship of the colony. Quick and Bradley became the owners of the enterprise and gave it the name it bears today, the Grand Marais Art Colony.

The art colony offered art classes to children and adults alike. It hosted jazz and symphony concerts, lectures and a variety of events. Each Monday night, Bradley and Quick hosted a fish fry and art demonstration. Fishing and exploring the beautiful North Shore was encouraged and outdoor painting was a constant focus.

From that long tenure, Quick’s name became synonymous with the founding of the art colony. However, fans of the talented and prolific artist know that he produced over 10,000 works of art during his career. Quick’s work was shown in numerous oneman and group exhibitions in galleries such as Duluth’s Art Institute and the Tweed Gallery, Walker Art Center, Minneapolis Institute of Arts, the Art Institute of Chicago and more. Locally, Quick’s work can be seen on murals at the Grand Marais State Bank and in private homes and businesses.

Through the summer, his work can also be seen at the Johnson Heritage Post, just down the road from his beloved art colony and just across the street from the lake that drew him here. Stop by and enjoy A Quick Reflection.